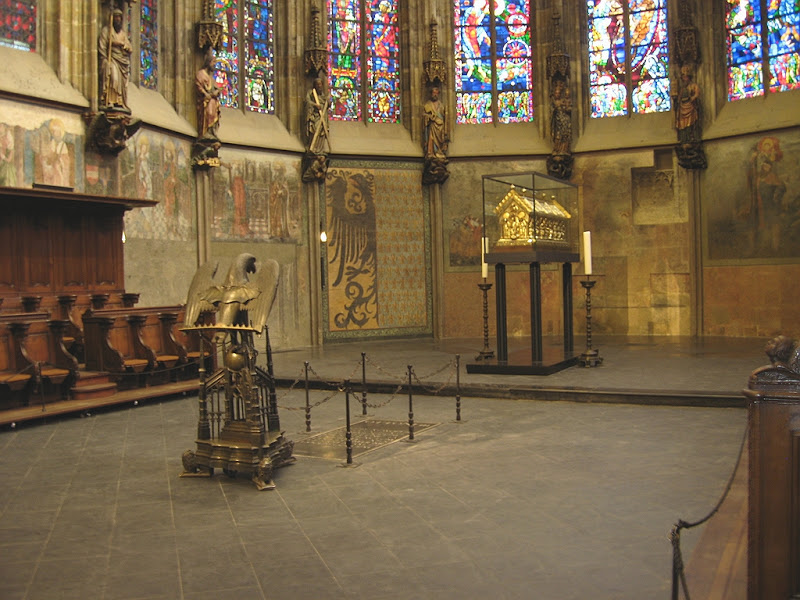 The "Karlsschrein", the shrine at Aachen Cathedral containing the remains of Charlemagne (born 742 AD).
My aim is to get a vast number of famous people in the West onto one family tree, all descending ultimately from Charlemagne.
Photo 2007 from Volker Toensing. Creative Commons.

Why a list of Royal Descents? Because I am interested in showing the common relationship of all humanity. I wish to get a good sample of humanity on the same family tree, where every single step in the descent is proven. Royal Descents are probably the most convenient way of doing this.

All humanity is interrelated many times over (contrary to what an endless procession of racists and tribalists throughout history have claimed or implied). For any two humans in history or today, it is not a question of do they have a common ancestor, it is only a question of when was the most recent one. If we had full genealogical records for all of human history and pre-history, then any two living people on earth could identify their closest relationship to each other. Or indeed any two living organisms on earth, since DNA probably did not evolve twice. One could also pick any famous person, alive or dead, and show your closest relationship to them. For they are all related. See pre-historical estimates for Common ancestors of all humans.

Descent from the English Royal family

Showing descents from Western royalty is probably the most convenient way of tying the West together. For various reasons, the English or French royal families are probably the best family trees to anchor a "western family tree" in. Here I pick the English Royal line to base the list on, but the list could easily be re-organised to be based on the French Royal line.

You will be aware, hopefully, that the English, French and other European royal families are all inter-related, and all descend ultimately from Charlemagne.

So to give the list some structure, I organise it around the English monarchs, and I show short descents from the most recent monarch, rather than everyone needing a very long descent going all the way back to Charlemagne. I organise the list in a nested format to make it easy to see how later monarchs descend from earlier ones. Every person in my list descends ultimately from Charlemagne.

Descent from other European Royal families

Once you connect to the English Royal family, you connect to the royalty and nobility of other European countries. Many other descents of the people below from other royal houses can easily be worked out. The French Royal line is an obvious example.

It would be nice to expand this tree beyond the West, but it does not seem likely.

There have been attempts to construct an Islamic family tree, on which would be famous Muslims and (maybe) famous Christian westerners. The Islamic world collects alleged descents of famous Muslim people from the Prophet Muhammad. Some of these may be true.

There have also been attempts to show descent of European royal and noble houses from Muslim lines and ultimately from the Prophet Muhammad, but none are proved.

For much of the non-Western world, genealogies are lost. In many parts of the world, a succession of tyrants have destroyed people's connection to the past by burning the country's genealogies. Communists did this deliberately, as part of their ideology. (*) Religions also often destroyed the libraries and genealogies of other religions. Examples include:

(*) Ironically, given communist contempt for genealogy, all the following have proven Royal Descents:

So there seems little hope of expanding this tree outside the West - by working backwards at least.

Really unifying the world on one tree now will have to depend on ongoing marriage rather than further historical discoveries. With the increasing rate of intermarriage between different cultures (or at least, people with different ancestral cultures) there will eventually develop a "World Family Tree", outside of which very few people will lie. In a few centuries' time, the entire world will be provably descended from Charlemagne (or perhaps some non-Western common ancestor) at birth. Everyone will be provably related to everyone else.

The West probably descends from Charlemagne

There is exponential growth in our ancestors (going backward). Consider that you need 2 parents, 4 grandparents, 8 great-grandparents, and so on. Assuming an average of about 25 years per generation, you only need to go back to about 1200 AD, quite within historical times, to need more separate ancestors than the entire population of the world. The solution to this paradox is of course that ancestors are duplicated. All of us descend from a massive amount of intermarriage even within the last few hundred years.

See estimates for Common ancestors of all humans, which has some surprising findings. Restricting ourselves just to Europe (and those of European descent abroad) it is quite likely that the most recent common ancestor of the West lies within historical times. It is possible, for example, that every single westerner descends from Charlemagne.

We all (in the West) probably descend from Charlemagne. But can you prove it step-by-step? What makes the people on this list special is that we can prove every step of their descent.

Some people think these kind of descents are contrived, in that, say, Elizabeth II is the "real" descendant of William the Conqueror, and all these are rather artificial descents. This betrays a lack of understanding of history. The House of Windsor is an arbitrary subset of the millions of proven direct descendants of William the Conqueror. The Royal line is the product of a long series of political decisions over the years, rather than the result of following any unvarying rule. (And arguably there's nothing wrong with that. After all, it makes it more democratic.)

To make it clear, everyone in this list is a direct descendant of Charlemagne in the same sense that any member of modern royalty is. I only ever use "ancestor" or "descendant" to mean "direct ancestor" or "direct descendant". If someone is a brother or cousin of your direct ancestor, some people would call them a "collateral ancestor", or even just an "ancestor". To me they are not your ancestor but rather a blood relation.

Some of the main contributors to this collection of Royal Descents are:

"To nationalists, shared blood is everything: for them, history is made in bed.
Biology is the test of their ideas, and usually it proves them wrong."
- Steve Jones, in [Jones, 1996].