He mar 1525 to Jane Guildford [born 1509, dau of Sir Edward Guildford].
He was cr Viscount Lisle 1543.
Lord High Admiral (head of the Royal Navy) 1543-47. He re-organised the English navy.
He became one of the Protestant leaders at the court of Henry VIII.
Henry VIII died January 1547.

Lady Jane Grey plot and execution, 1553:
As Edward VI was dying with no heir, Dudley planned to make his daughter-in-law, the teenage Lady Jane Grey, Queen of England, and hence to effectively rule himself. Edward VI named her as his successor in June 1553.
Edward VI died 6 July 1553. Jane was Queen for 9 days in July 1553, but was rapidly deposed by Mary.
After Lady Jane's fall, Dudley tried to escape execution by renouncing Protestantism, saying "A living dog is better than a dead lion". This earned widespread contempt. Lady Jane said: "I pray God I, nor no friend of mine die so".

John Dudley, 1st Duke of Northumberland.
From NPG. See terms of use.
See images at [NPG].

Chapel of St. Peter ad Vincula, Tower of London (burial place of John Dudley, 1st Duke of Northumberland, and others executed there).
Photo 2003. See full size.
From Lara Eakins. See terms of use.
Search for more photos and Creative Commons photos of chapel. 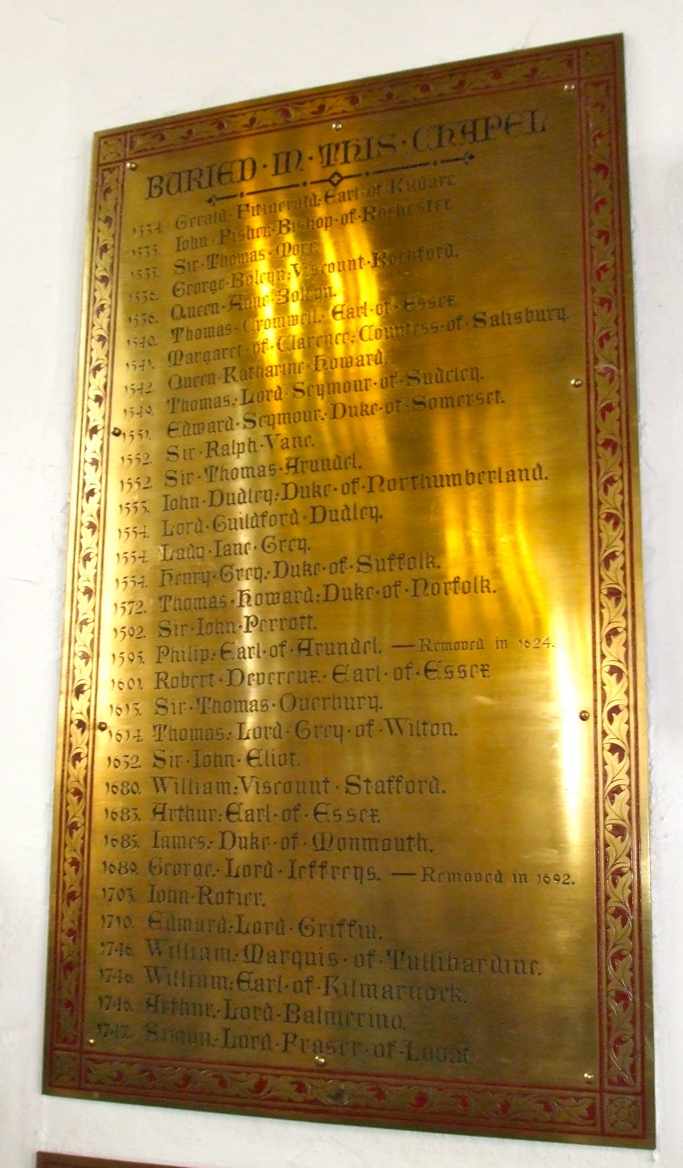 Plaque on wall of Chapel of St. Peter ad Vincula, Tower of London, listing some of those buried there with no monument (after their execution).
Image courtesy of The Anne Boleyn Files.
See full size.